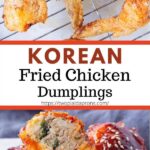 These Korean Fried Chicken Wing Gyozas, inspired by Food Wars, ought to be nominated as the best fried chicken wings ever! These wing gyozas have the perfect crunch, juicy pork filling, and a flavor bomb of a sauce that's sweet, spicy, tangy, and savory. 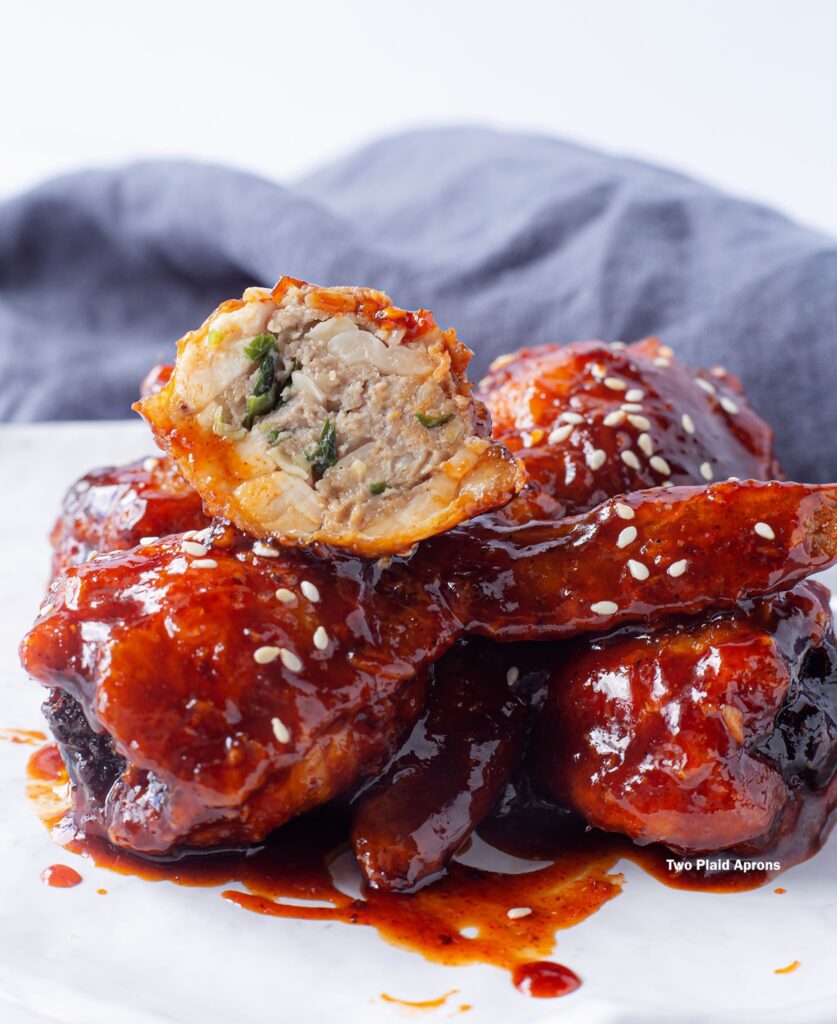 This Korean fried chicken wing gyoza recipe has a special place in our hearts. It's the recipe that landed us in the blogging world!

We were watching one of our favorite anime, Food Wars, and came across the episode about wing gyozas, and we were like, "Yassss! How did we not think of that?! It's literally two of our favorite foods combined."

The anime made the wings look so good and appetizing! And not to brag, but I think we did a pretty good job making ours tasty and gram worthy. 😉  But to make the process a little easier along with a little of our own twist, we decided to deep fry the wings and glaze it with some Korean fried chicken wing sauce.

The end product? We get these super crispy chicken wings that stays crispy much longer than traditional fried chicken, even when tossed with sauce. The pork gyoza filling stayed juicy and provided an extra dose of umami. Then the sauce completes the wing gyozas with combinations of sweet, spicy, tangy, and savory. Mhmm, yummm! 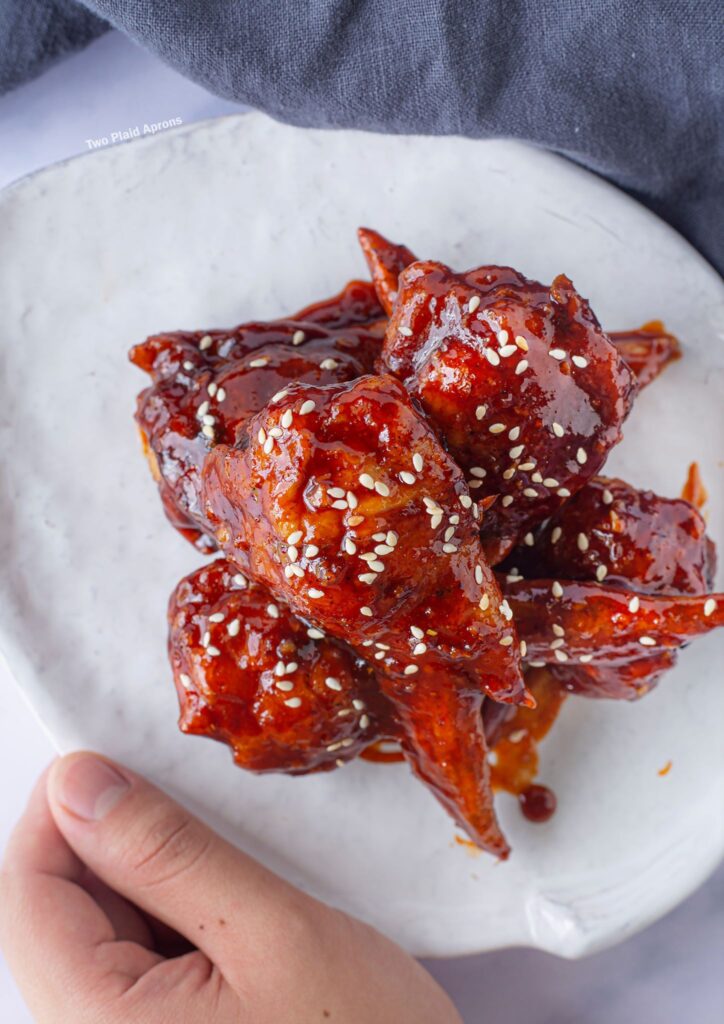 What's the difference between gyoza and dumplings?

Gyozas and Chinese dumplings are essentially the same thing with some minor differences. One main difference is that gyoza is Japanese and uses a thinner wrapper than Chinese dumplings and the filling is chopped finer. But in terms of execution, flavors, and cooking styles, they are very similar. 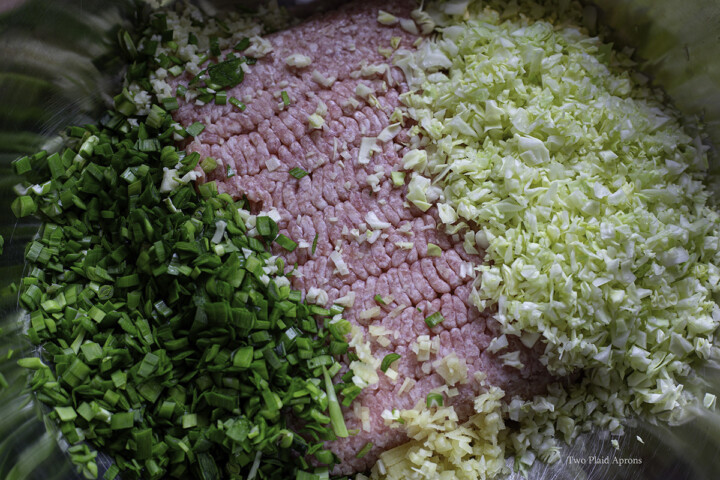 What is gyoza filling made of?

Like Chinese dumplings, gyoza fillings consist mainly of minced/ ground pork and chopped cabbage, but don't limit yourself! You can absolutely add other seasonings, garlic, ginger, and other vegetables to it. Although gyozas with pork filling is the most popular ones, there are other options like chicken or even vegetarian. 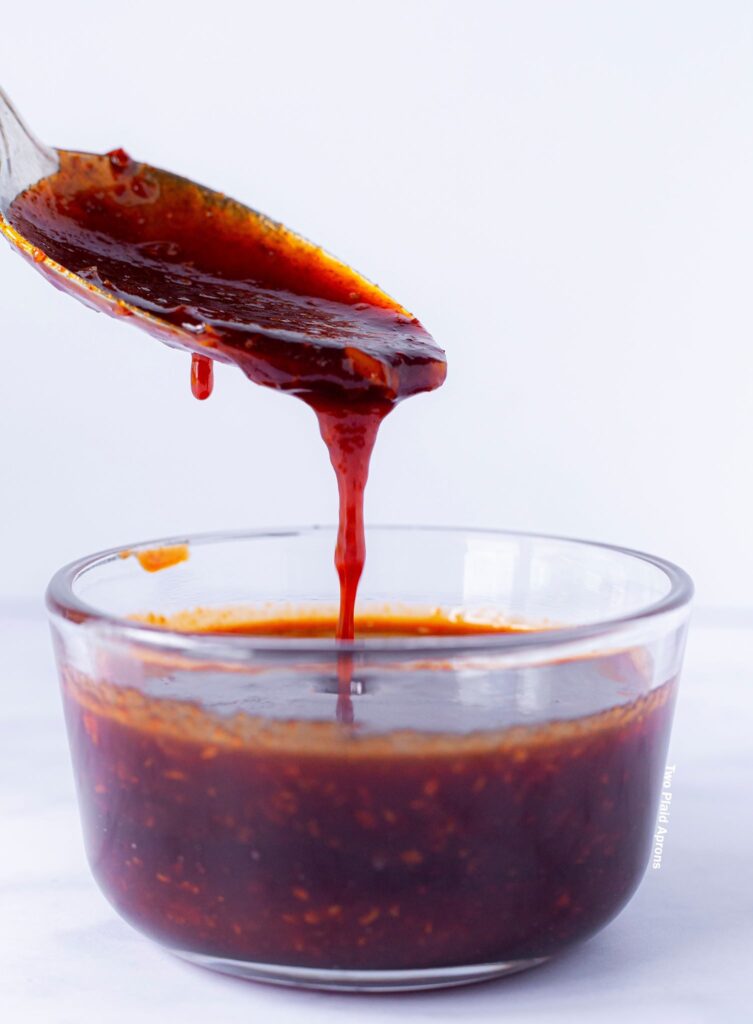 Korean fried chicken wings have one of the most well-round flavors! The wings are crispy and the sauce is a perfect flavor bomb. It's sweet, tangy, spicy, and savory. And stuffed with our pork dumpling filling, the wings got the last flavor locked in: umami!

Yes! All five flavors in one bite and did I mention? It's super juicy! 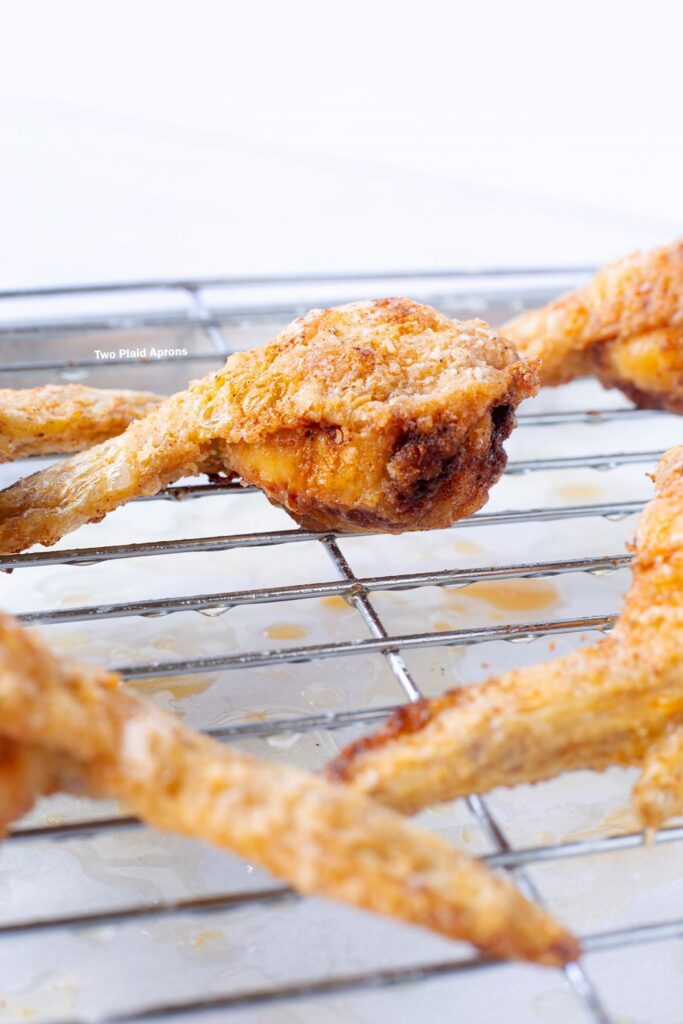 So you're probably wondering what is all the craze with Korean fried chicken wings and how is it so crispy. Right? Well the secret lies in two things. 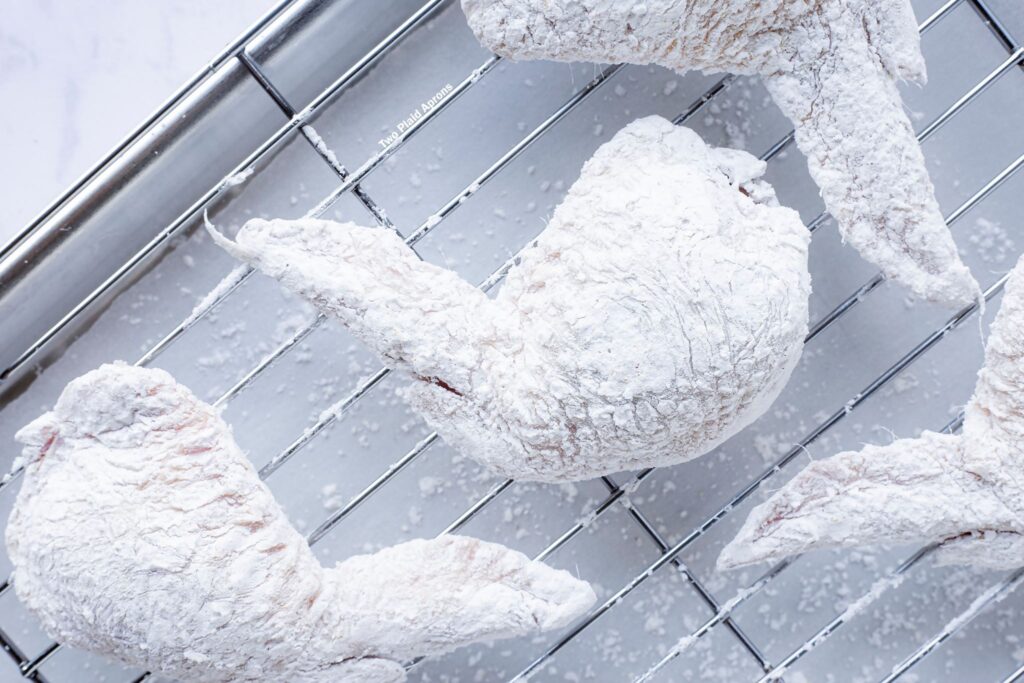 Can I substitute potato starch for something else?

Yes! If you are unable to get your hands on some potato starch, you can use cornstarch as a substitute.

In our recipe, we use a combination of potato and cornstarch, but you're welcomed to use either one or the other. They both fry up really well and keep things crispy. However, I do want to mention that, personally, I find potato starch makes a lighter crisp while cornstarch creates a harder crisp. 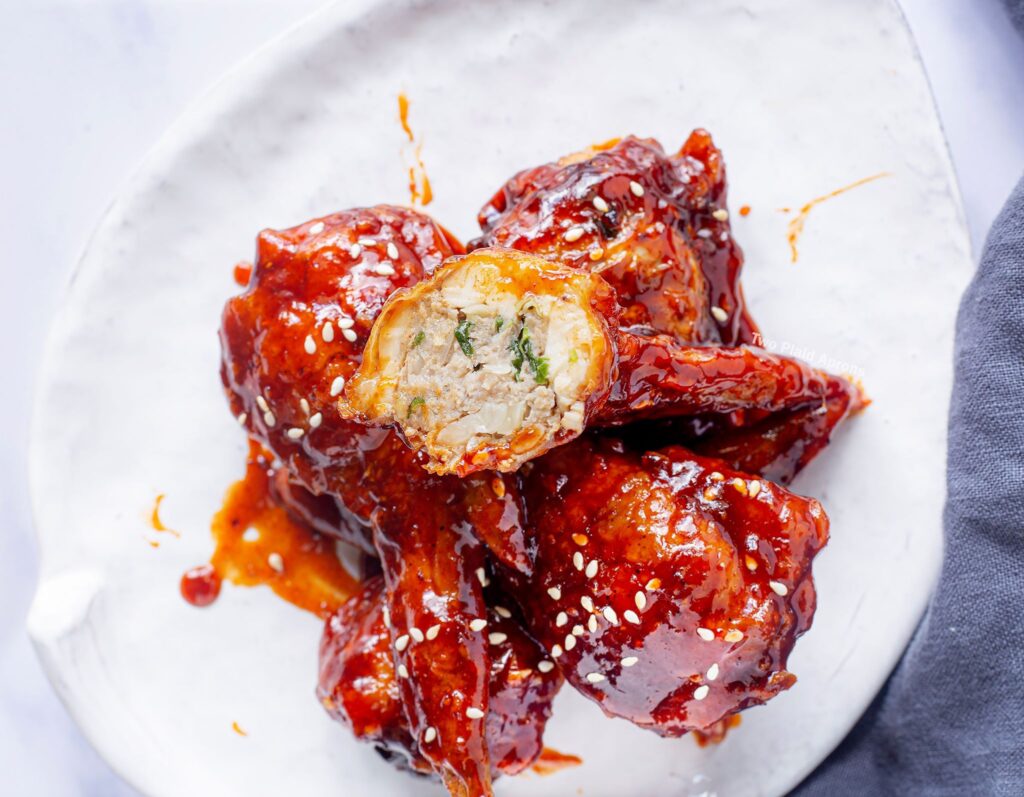 Use a heavy bottom pot for frying

I highly recommend investing in a heavy bottom pot, like cast irons, for frying. We love our Staub dutch oven and intend on purchasing another one soon! These pots tend to hold heat much better than regular metal pots, and you'll never have to worry about the oil's temperature dropping drastically ever again!

How do you debone wings?

You might think, why would anyone bother to debone wings. Well, for these amazing Korean fried chicken wing gyozas, of course!

To debone wings for these wing gyozas: 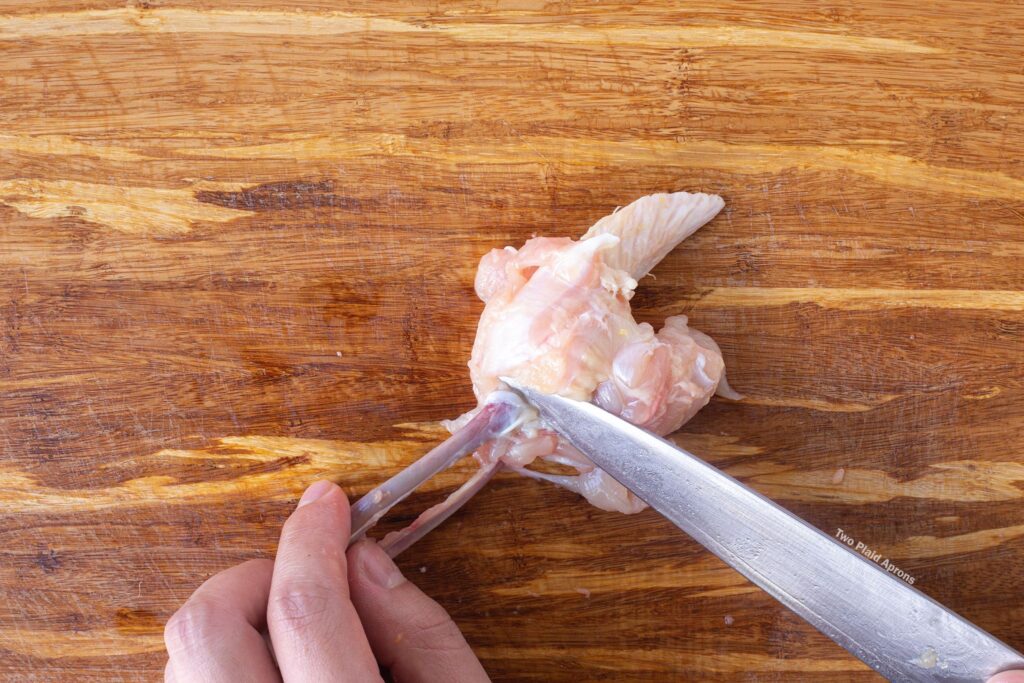 Can I use the drummettes as well?

For making Korean fried chicken wing gyozas, I don't really recommend using drummettes. We are totally not discriminating! It's just that if drummettes were deboned, they would be open on both ends. Not the best for stuffing for sure. Buuuuuutttt, that doesn't mean you can't toss them in some potato starch, fry them up, and share some of that Korean fried chicken wing sauce!

How much filling can I stuff in my chicken wing? 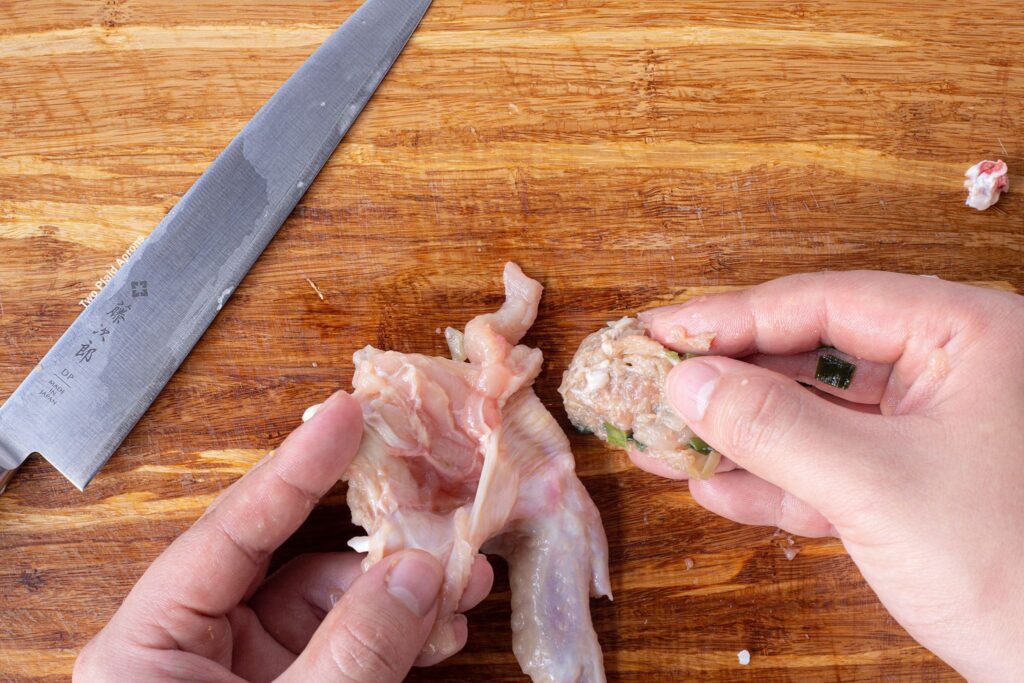 That really depends on the size of the wings. Our wings can typically hold about a skimp Tablespoon worth of filling. I like my gyozas and dumplings as plump as can be, but I learned my lesson with these chicken wing gyozas that over stuffing is a no-no. 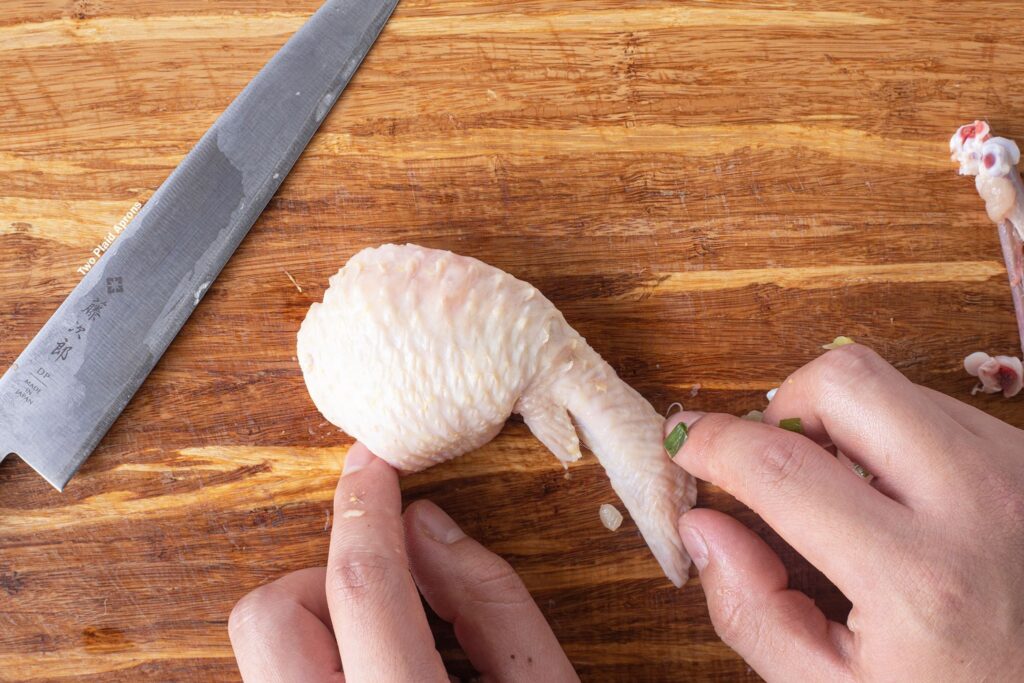 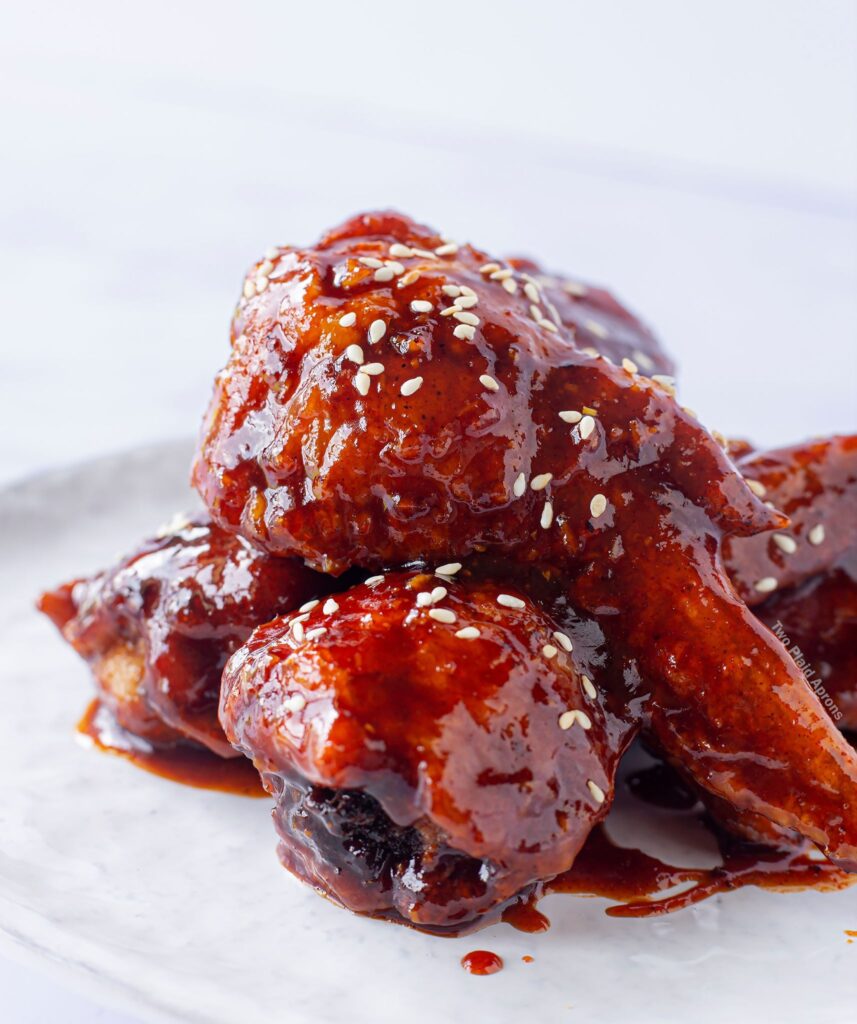 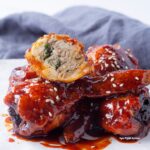 These Korean Fried Chicken Wing Gyozas, inspired by Food Wars, ought to be nominated as the best fried chicken wings ever! These wing gyozas have the perfect crunch, juicy pork filling, and a flavor bomb of a sauce that's sweet, spicy, tangy, and savory.
Prep Time30 mins
Cook Time10 mins
Total Time40 mins
Yield: 3 servings (about 6 wing dumplings per person)
Prevent your screen from going dark

*If you need a good pork dumpling filling recipe, we got you! Either click on the hyperlink or search "Chinese pork dumpling" in our search bar. 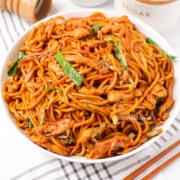 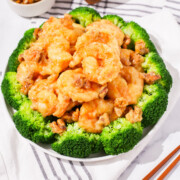 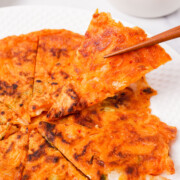 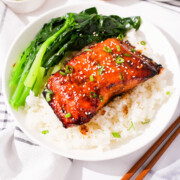